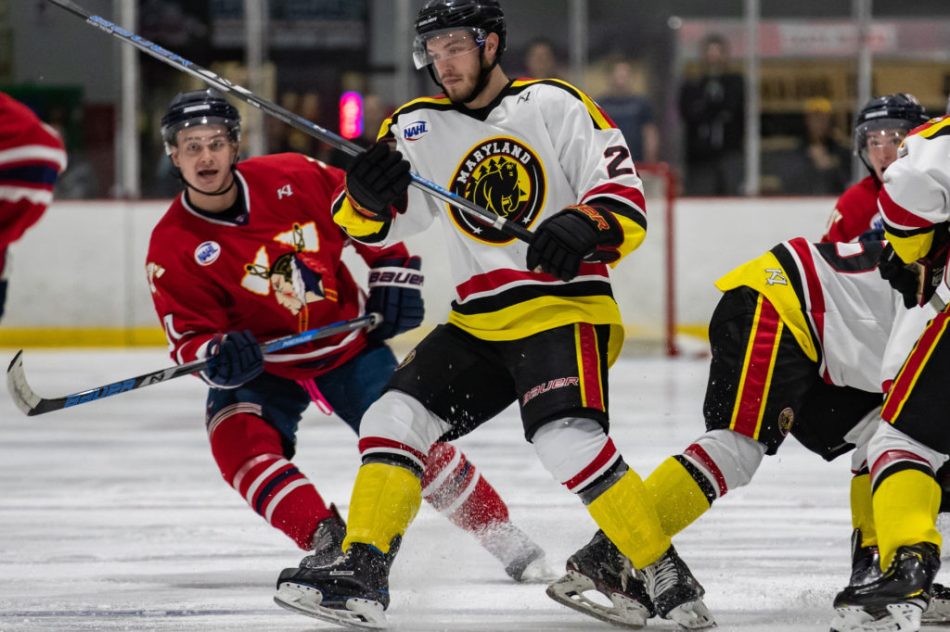 The Black Bears are back in action this weekend as they welcome in East Division rival the Johnstown Tomahawks to Piney this weekend for a two game home stand on Friday and Saturday night. Johnstown (4-4-1-1) has dropped a game in OT and in a shoot out, making them good for 10 points and third place in the division. The Black Bears (4-4-0-0) have two less games played and sit at 8 points, good for fifth in the division. A weekend sweep would be ideal for Maryland, as that would catapult them into that top 3 in the East. Last season, the Black Bears and Tomahawks faced each other 12 times…. Johnstown would take home a win in 11 of those. BUT, this is a different Black Bears team, and much improved from last season. In half of the 10 games that Johnstown has played so far this season, they’ve let up 4+ goals. Alex Tracy is the Tomahawks horse in net so far, playing 5 of the 10 games. He’s 3-1-0-1 with 17 GA, a 3.25 GAA, and 0.892 SV%. That ain’t no thang to the GOAT, Wilmer Skoog, who’s sitting at 7G-8A–15PTS, as well as the other two Maryland leaders Jackson Sterrett 5G-6A–11PTS and Brayden Stannard 2G-8A–10PTS. Get ya selves to Piney Orchard this weekend and root on the Black Bears in this massive home series vs a divisional opponent.

It’s about to go DOWNNNNNNNNNNN this weekend in Richmond this weekend as the Generals will welcome in-state rival Hampton Roads Whalers for their first match ups of the season. Two championship caliber programs are about to go toe-to-toe at SkateNation Plus and these are four games you’re not gonna want to miss, so let’s get into em.

The Elite teams will get the party started on Saturday and Sunday as they’ll drop the puck first in each of the double headers. Saturday at 4:30 and Sunday at 8:15AM (holy shit that’s early, get your coffee.. and maybe some jack to go in it, ready for that one). This is a big one for both teams, as Hampton (4-3-0-1) are coming out of a weekend that saw them drop both games to the Carolina Jr Hurricanes, and Richmond (8-2-0-0) is coming off a weekend sweep over the Potomac Patriots in which they didn’t allow a single goal in either game. Keep an eye on Richmond’s Cooper Neal, who’s coming off a 4 assist weekend, giving him 7 assists in his last 5 games. That guys been pickin’ apples lef tand right to start the season. On the away bench, it’ll be interesting to see who gets the nod in net against the Generals, as Kenny Vought already has 290 min under his belt, but has a GAA of 2.69.. (nice). The Generals have a 7 point lead over the Whalers in the South East Division standings, and if Hampton Roads want’s anything to do with closing that gap, they’ll need a massive 4 point weekend.

The Premier squads will be the second act in the double header on both days, dropping the puck at 7:30 Saturday night, and 11:15 AM on Sunday morning.. sorry folks, you may have to take a rain check on church to go see how this one plays out. The gap in the standings between these two Virginia rivals is a lot closer in the Premier division, as the Richmond Generals (6-4-0-0) are only two points, with 12 total, above the Hampton Road Whalers (5-3-0-0) who have 10. Obviously, a weekend split doesn’t help either team separate themselves from the other, so both will be firing for a sweep. On the home bench, keep an eye out for center Matt Wood, who’s got a tuck in three straight games. He picked an apple in that span too, giving him 4 points and counting on his heater. For the Whalers, look no farther than their wagon, #8 Jacob Kaplan. He too is on a 3 game goal scoring streak, but he’s potted 5 in that span. Which one of these guys will keep the hand hot and get their respective teams a massive win… or two, this weekend.

Team Maryland Staying in the Hunt

Team Maryland (6-5-1) is heading to West Chester, PA this weekend for a pair of games vs the Seahawks Hockey Club and New Hampshire Avalanche. Prior to doing so, TM had two games during the week vs the Philly Little Flyers, the first being on Wednesday when they had a 3-1 lead heading into the third, but would allow the Flyers to score 4 unanswered in the final frame to walk away with a 5-3 win. Thursdays game would be a different story, as they would get revenge and blow out the Flyers 7-3. Jay de Ruiter is still leading the way for the Maryland squad with 5G-6A–11PTS, but has struggled to produce much offense since putting up 5 goals and 3 assists in his first 3 games of the season.

PPats Brace for a Storm

The Potomac squads are home at Prince William this weekend, as they welcome in a daunting task of trying to stop two powerful teams in the Carolina Jr Hurricanes.

The Premier Patriots (3-6-0-1) have a tall order of trying to stop the first place Hurricanes, who come in at 7-3-0-0 on they year, and a weekend removed from sweeping the Hampton Roads Whalers. One of the few bright spots on this Potomac team has been left winger Danils Berzins, who had 2 goals in last Sunday’s loss to the Generals, and has scored in 4 of the 7 games he’s suited up in. He’ll need to be on his A game if the Patriots want to pull the upset this weekend.

The Patriots Elite team (1-8-0-0) truly will have to weather a hell of a storm, as they welcome in the 10-0-0-0, undefeated Jr Hurricanes. The Canes are +30 in goal differential, so the Patriots goalies will have to literally be brick walls this weekend if they have any chance of pulling an upset.