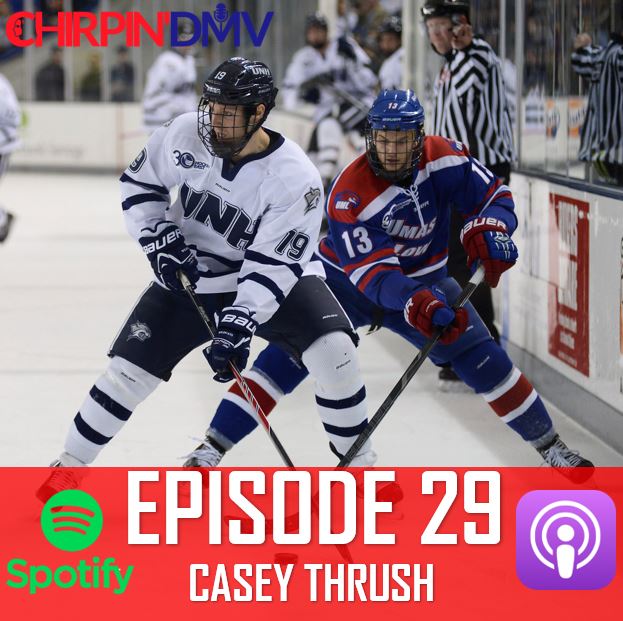 Episode 29 is out now on iTunes and Spotify and it’s a loadedddddddd one as we hit the 2 hour mark. But hey, an episode that long is perfect for the Thanksgiving holiday when you don’t wanna listen to your weird family members you never see out side of the holidays, and probably for good reason. Just pop in the head phones, go sit in the car, do whatever it is that you do when you listen to the pod, and enjoy.

Per usual, we kick things off with the weekend recap then get wild with the score board run down. We break the newest Chirpin DMV college power rankings (high school soon to come) and recap all the action from the week prior across the NVSHL, MAPHL, MSHL, and CSHL. Speaking of high school, the guys do a weekly “Team of the Week” where each of us, myself, KP and AB pick a DMV team from the high school, college, or junior circuit who had a hell of a week/weekend and choose them as our team of the week, pretty damn simple. SO, for episode 29, here are the Chirpin DMV teams of the wee: (minus KP due to him missing the first half of the episode)

AB is rolling with the MSHL defending champs Winston Churchill as they had a huge match-up Friday night vs Bethesda Chevy-Chase for sole possession of first place in the Howard Conference. James Strand would start the scoring in the first to put the Bulldogs up 1-0. BCC would score two in a row, but Churchill and Nicky Carline would tie it at 2 late in the second period. The third is where things would really pop off, as Churchill would explode for three goals in 4:45 to take a commanding 5-2 lead behind goals by Parson, Margel, and Brodsky. The game was rather in control at that point, even though BCC would tuck two late to make it a one goal, 5-4 win for the defending champs. Tendy Rigel Goodrich stopped 19 of 23 for the win, and Churchill is off to a 5-0-0 league record to start the season.

I’m flying with the Eagles this week after a wild game that went down last week in a non-league contest vs Georgetown Prep. Gonzaga would find themselves down 2-0 in a ROWDY road game at Cabin John. The place was packed, literally no room around the glass it was that crazy. No worries tho, as the Eagles score four unanswered, silence the crowd, and get outta town with a 4-2 win. Farrell Dinn would score twice as well as goals from Nick Garner and Robbie Dubay. We also mentioned on the pod how crazy the atmosphere was after the win, and see below for the video. Absoluty nuts, gotta love big time high school hockey.

We also recap the Maryland Black Bears weekend in Johnstown, Team Marylands sweep over the Jr Flyers, and all the action in the USPHL for the DMV squads. Our interview is an awesome one, as we chat with DeMatha alum Casey Thursh for about a half hour talking about his career start to finish. An Easton, MD native, he talks about commuting across the bridge for youth hockey, and takes us through his time at DeMatha, University of New Hampshire, the USHL, and his two final season in the ECHL. Awesome interview, awesome dude, and a must listen for all you DMV hockey fans. Here’s a video clip of him scoring a game winner during his time at UNH.

We get into the normal segments with NHL news and notes, unleash the fury, who’s hot who’s not, but we talk a bit about AB, who is now in his SECOND battle with Vegas Golden Knights fans on twitter. Here’s a look at the first brawl he got in to back during the cup final.

Wanna see a person die? Click on that tweet by Dylan there above and look at all the mentions and replies he got to that tweet. RIP IN PEACE, CAPS IN 5. But, here we are, some time later, and Flower makes a sick save.. Vegas twitter goes nuts…. but here comes AB

SO, if you’ve learned anything today, it’s that you can stroll Vegas Golden Knights twitter and good chance be able to hop into a battle with AB. Happy Thanksgiving DMV, have a wild one.