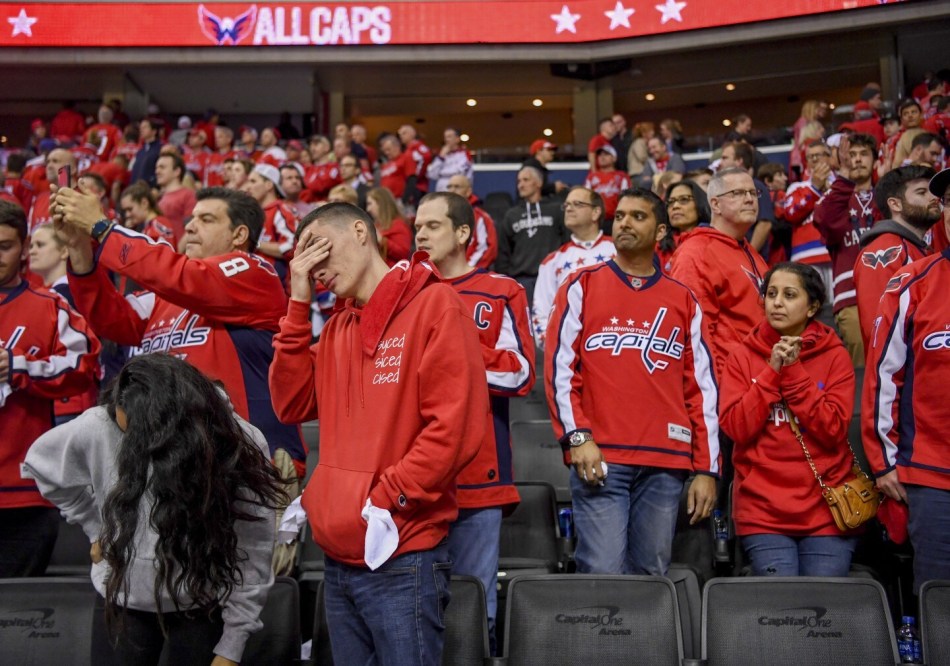 There’s no doubt about it right now, the Caps have been in a bit of a slump since a little before Christmas. We’ve got all of Caps Twitter calling for heads as our first place team struggles to the All-Star break for the second season in a row. I’ve seen both sides of this internal war amongst the fan base and both sides bring up decent points. I’ve seen the word “spoiled” thrown around (if you want to see a spoiled fan base, go check Penguins twitter). So how close is the Panic button for us as fans? Still in the back pocket? Have you brought it out yet? Is your hand hovering it yet? (If it is you’re insane). Either way, I think we can all agree that the Caps have been playing some bad hockey as of late. Do they just need the all-star break or do they need a spark through some type of change? I’ve found that there are five common themes that seem to be uttered during this ugly brand of undesirable hockey. Jensen, Rierden, Panik, Powerplay struggles, and too many penalties.

I was never a fan of this pick up and immediate extension. The caps were wayyyyy too quick on the trigger to resign this guy considering they got him during a rental time of the season. He hasn’t produced offensively and has become a huge liability with and even without the puck on defense. As a defenseman, you need to at least be able to succeed in one end of the ice. When you can’t in either it becomes a glaring hole in a lineup. Here’s a quick look at some interesting stats relating to his offense.

This thread really opened my eyes to how bad he actually has been. But hey, maybe he can make up for it with his defensive play?

YIKESSSSS. I mean that turnover is HORRENDOUS. Not only does he have time to breakout, he has 2 wide open options up the ice and just refused to pass the puck up ice. Boom, turnover, Caps down 1-0 early.

Now I know this is only 1 example, but that play just CANNOT happen. And this is how his decision making has been all season…hesitant and scared. That’s a guy with no confidence and he needs to find a way to get some.

Here’s a guy that I’m not quite understanding why people are hating on him so much. He’s the caps most recent pickup (besides Gudas) that plays every game so he is under the microscope for Caps fans. However, he hasn’t really done anything that bad to deserve the hate he’s gotten. This is where I think us as fans have been spoiled from a 20-goal scorer in Brett Connolly on the 3rd line. Sure, Panik isn’t producing at the level Connolly was, but he plays solid minutes on the penalty kill whenever Hags, Dowd, Wilson, etc. can’t. He’s not too bad of a liability in his own zone. The third line we have is a grind it out and wear them down type line in Eller, Hagelin, and Panik. They’re not gonna put up huge third line numbers like we are use to. Look at Hagelin, he doesn’t produce huge numbers, but he fans love him for his energy and defensive play. I think Panik has done fine thus far into his Caps career. Nothing special to rave about, nothing too horrible where he has been the blame for losing game, he’s been okay.

Todd Rierden, The Powerplay, and Penalties

Now this guy… This is where I’m blinded and spoiled for my love of Barry Trotz. Every time Uncle Todd has an important decision to make I seem to disagree with. But hey, he’s the one with the experience and is getting paid the big bucks so he obviously knows a lot more than me. There have been several instances where my hate for Todd Rierden grows. We’ll start with the first one, the 7 game series against the Canes. The Caps were stunned by the aggressive, high pressure forecheck of the Carolina Hurricanes. Now let me remind you, they had 7 GAMES to adjust to it…. 7 GAMES. And to me it felt like they were shocked every game by how aggressive the Hurricanes played. They made our defense VERY uncomfortable with the puck in their own zone. And it felt like the Caps and Rierden did absolutely nothing to combat it. And they still haven’t to this day. The Hurricanes seem to outplay us every game, as well as any other team with a 2 man puck side attack forecheck. FIGURE IT OUT. Dump the puck high off the glass and figure out a neutral zone trap if you have to. But if he can’t figure out how to handle a heavy forecheck, the Caps won’t be successful in the playoffs.

Another area where I disagree with Rierden (and at this point, GMBM) is the goalie situation. We’ve been through it all with Holtby at this point in his career. And don’t get me wrong, I am forever grateful for Holtby, he won us a Cup, he’s the reason why the Caps are so successful and win all of these division championships. But we know he can go through his slumps. We’ve also seen that multiple times, it happens almost every season. I’ve always been the type that likes a short leash on the goaltending situation IF you have 2 goaltenders who are capable of being great. The caps currently have that with Sammy and Holtby. It’s no debate right now that Holtby is in a bit of a slump. So why not run with the hot hand here in the regular season? Gives Holtby some rest, let him reset, settle his mind a bit, almost act like its a start to a new season for him after the All-Star break? We’ve seen it work before with Gruby and what happened then? Can someone remind me? Oh yeah, they went on to win the Stanley Cup. Give Holtby rest and start to get him going again when the big games come in mid-February/March. We know he’ll show up for playoffs. He IS our guy. He knows that. So does the team. He’ll get the start Game 1 of the first round. So rest for now so he can be ready for the playoffs.

Lastly, we’ve got the powerplay struggles and the amount of penalties the team has taken. The powerplay needs change. We’ve been doing the same thing, running the same powerplay for 4-5 years now, and we’re shocked that it’s all of the sudden not working? Change it up.

So what does Todd do for change? He takes the most consistent player on the team off of PP1 and doesn’t change the system AT ALL. That’s not really what I meant by change. I did say he should throw Vrana up to the first PP line, but taking off KUZY?? I mean that is insane. The type of change I’m talking is systematical. DESTROY THE SLINGSHOT. Add in a rotation play! GET THE POWERPLAY MOVING! We have a very stationary powerplay which causes them to lose the 50/50 puck battles. Honestly at this point, just act like you’re still playing 5v5 and run lines and run the cycle. See what happens and have a defenseman slide in from the point, someones gotta be open when you’re playing 5-on-4. At this point, the struggles are far beyond personnel changes. Check out a detailed blog on the Caps PP struggles here:

There’s not much to be said about the amount of penalties we take. Other than, STOP FUCKING TAKING PENALTIES. Is this a coaching issue or is this on the players? A coach can only do so much to get them to stop taking penalties. It definitely is a discipline issue that the coach needs to address. But outside of that, my opinion is that it’s the players that need to get their feet moving and stop taking these lazy stick penalties.

Now I understand that the Caps are in first place and we should be hyping our guys up and thanking them for being in the position they are in right now. I understand that they also did this last year heading into the all-star break. But if you also look at what happened last year, we lost in the first round of the playoffs in a VERY winnable Eastern Conference. The top-dogs went down like flies last year. It was ours for the taking. So if you wanna compare it to last year, I would say last year was a huge disappointment losing in the first round. I don’t think panicking is the correct term for it yet. But I do believe some changes need to be made, and players need to step up for the second half of this season.